Subject is a quote from a recent talk by James Bessen on Economic Inequality and Technology: How Knowledge Sharing Helps. 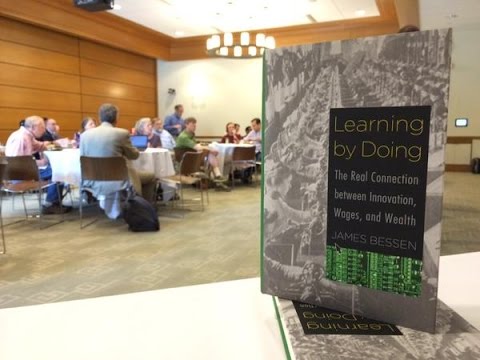 The talk, and presumably Bessen’s recent book, Learning by Doing: The Real Connection between Innovation, Wages, and Wealth (Vox review), covers his take on the impact of automation and innovation on jobs, wages, and inequality. To oversimplify, Bessen claims automation and innovation suppress jobs and wages until skills and standards catch up. This has happened before, e.g., in the industrial revolution, when it took a couple generations to catch up.

Increased skills lead to the net effect of automation being increased labor productivity and thus demand for labor, rather than just labor saving. Increased standardization gives labor more leverage, as workers can then move from firm to firm and take their skills and knowledge with them.

Bessen mentioned that in previous eras government procurement has played a significant role in encouraging standardization, but more recently it has increasingly opted for proprietary procurement from politically connected vendors, e.g., in the U.S., the largest defense contractors.

Government procurement policy and funding mandates are already two of the most promising avenues for favoring commons-based production; the increased leverage workers gain from having more transferable skills and knowledge provides another reason to pursue this and other commons-favoring policy.

It’s worth noting though that transferable skills and knowledge can be the result of a proprietary near monopoly. To take a silly example, social media experts might have more leverage in the labor market because they can transfer their like- and tweet-mongering skills anywhere, and the network effects of those platforms additionally increase perceived necessity of employer participation in social media. Transferability is a reason it can be difficult to introduce a free/open alternative to a workplace or classroom in the face of use and teaching of a dominant proprietary thing: workers already know the dominant thing or know that they can use that knowledge to get a different job.

This brings us to a reason “broadly shared knowledge is key to broadly shared wealth” that Bessen didn’t mention in the talk. “Standardization” on a proprietary thing may help equality by the labor market mechanisms Bessen describes, but at the same time monopoly rents accruing to the owners of the dominant proprietary thing abet wealth concentration, increasing inequality.

In the talk Bessen mentioned a number of areas for reform, some directly relating to IP, some concerning other barriers to labor mobility and knowledge sharing, such as occupational licensing and non-compete agreements. He specifically mentioned open source and similar pre-digital knowledge sharing practices. He also mentioned community colleges and contented that there is a “skills gap.” He didn’t mention, but obviously Open Access and Open Educational Resources as well as open source are implicated as solutions. I read Bessen’s previous book, Patent Failure: How Judges, Bureaucrats, and Lawyers Put Innovators at Risk several years ago, long enough to not recall much other than that its policy prescriptions did not go far enough given its economic descriptions (or more likely, my biases); par for the course.

James Bessen (born 1950) is an economist who has been a Lecturer at Boston University School of Law since 2004, and was previously a software developer and CEO of a software company. Bessen was also a Fellow at the Berkman Center for Internet and Society. Bessen researches the economics of innovation, including patents and economic history. He has written about software patents with Eric Maskin, arguing that they might inhibit innovation rather than stimulate progress. With Michael J. Meurer, he...